Luter, Greear, the most recent Southern Baptist leaders to weigh up when the turmoil over racial concept mounts

(RNS) – New Orleans pastor Fred Luter, the only black man to have served as president of the predominantly white Southern Baptist Convention, added his name to a justice and repentance statement released on Friday, December 18.

The “Justice, Repentance and SBC” statement comes from the Black Baptists and others continuing to protest against the rejection of the “Critical Race Theory,” a series of ideas about systemic racism, by the six white presidents of the SBC seminar.

Luter joined more than 230 other signatories to the declaration, released on the 155th anniversary of the proclamation of the 13th Amendment that officially ended slavery in the United States. By the eastern midday she had more than 230 signatures.

Originally issued by 20 black-and-white SBC leaders, the statement said the SBC, which “has injustice at heart to African slaves,” cannot ignore its racial history. She called for “collective repentance” for the mistreatment of colored people and the “systemic injustice” in SBC churches.

The statement said the SBC has made progress in integrating, but “some recent events have left many brothers and sisters of color feeling betrayed and wondering whether the SBC is working for racial reconciliation . “

It was said that “some in the SBC appear to be more concerned with political maneuvers” than racial diversity, and it has been suggested that the SBC was “co-opted by external political forces”. Those who have spoken about systemic racism are labeled “as” Marxists “,” liberals “and” theorists of critical races “although they are theologically orthodox and believe in the complete frugality of Scripture.”

CONNECTED: ‘We out’: Charlie dates on why his church is leaving the SBC for rejecting critical racial theory

Previously in October, some of the signatories signed a pledge from executives in cities in the deep south to “work for justice to correct past mistakes.”

Since the seminar presidents issued a statement on November 30th declaring critical racial theory incompatible with the denomination’s declaration of belief, several prominent black leaders and their churches have criticized their position and some have tried to break ties with the SBC.

On December 11, Rev. Marshal L. Ausberry Sr., president of the SBC’s National African American Fellowship and first vice president of the denomination, requested a meeting with seminary presidents. Five days later, Rev. Ralph D. West announced that he would withdraw his mega-church in Houston from belonging to the largest Protestant denomination in the country. On Friday (December 18), Pastor Charlie Dates said his church in Chicago was going and called the facilitators’ action “one last straw.”

Also on Friday, the denomination announced that SBC Executive Committee President Ronnie Floyd had agreed to meet with officials from the African American community, the SBC’s Council of Seminar Presidents, and SBC President JD Greear in early January to issue the statement the seminar leader, however, has affirmed critical racial theory.

“The Baptists of the South recognized and spoke very clearly the roots of our convention and against the sinful rot of racism that has no place, no welcome and no future in the SBC, in Biblical Christianity or in the Kingdom of God,” said Floyd.

Floyd cited the 1995 denomination resolution apologizing to African Americans for “tolerating and / or perpetuating individual and systemic racism in our lives,” and their 2000 statement of faith, which said, “In the Spirit Christ should be Christians against racism. ” But he added, “Now is the time for us to focus on our actions and our relationships.”

“Without relationships and conversation, we will not understand each other,” said Floyd. “As long as we don’t repent and change the way we look at each other, talk to each other, and treat each other, there will be no spiritual awakening or awakening.” 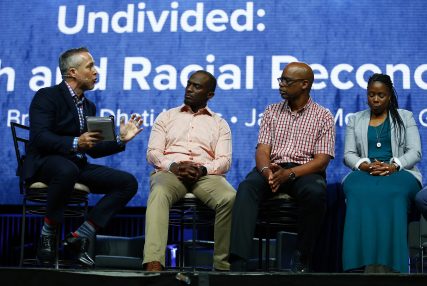 SBC President JD Greear speaks about a panel discussion on racial reconciliation during the annual Southern Baptist Convention at the BJCC on June 11, 2019 in Birmingham, Ala. RNA photo of Butch Dill.

Greear also commented on the ongoing debate on Friday, calling on Baptists to examine the “Justice, Repentance and SBC” statement “carefully and soberly.” On his blog, he reiterated his stance on critical racial theory while discouraging naming amid heated debates.

“We recognize that while secular philosophies like Critical Racial Theory arise from worldviews that are in direct conflict with our own, there are often things we can learn from questions raised and observations made,” he said. “We must not call believers who analyze certain questions differently as ‘Marxist’ or ‘racist’ by default. Not only is this charitable spirit lazy intellectually, it is a sin against the body of Christ. “

Although the signatories of the Justice, Repentance and SBC document signed their “With Hope” statement, they also appeared to issue a warning:

“Future collaboration remains possible and preferred when we work for biblical justice and repentance in the SBC,” they wrote. “However, if these commitments are not met, it will signal to many in the SBC that the collaboration has already ended.”

Norton Rose Fulbright, which offers a partial refund to its workers, could possibly make extra funds if workers preserve billing