I’ve electoral protesters and “By no means Trumpers” in my pews. How can we transfer ahead collectively?

(RNS) – I stepped on the pulpit on January 10th and felt an extraordinary weight. Four days earlier, 11 miles from our church, some of those protesting the confirmation of the presidential election broke glass, hit the police with American flags, and sparked the first incursion into the U.S. Capitol since the 1812 War.

The weight came not only from the confusing images of the day, but also from the different ways I knew that those who heard my sermon were viewing the events of the week.

I knew watching it online was the mother of Elizabeth of Knoxville, whose brief interview (“We’re storming the Capitol; it’s a revolution!”) Had been watched millions of times online.

Seated in the shrine was a woman who had prayed in the Capitol on January 6 to support President Donald Trump, another who accepted QAnon’s narratives, and a young man who had just returned from campaigning for Senator Kelly Loeffler in Georgia .

Also in the room was a black immigrant who later told me from his experience with American racism, “You would not have reached the Capitol doors if they had been a different color.”

The Never Trumpers in my ward were appalled by the President’s role in fueling the flames of the complaint. Some members were so angry at the Capitol invasion that they sought counseling.

The political diversity of our church is representative of our greater diversity – white and black, Anglo and Latino, immigrant and American-born Ph.D. and GED, homeless and in the city. The political spectrum that our people represent is wider than most of the churches I know. However, I suspect that most churches are more politically diverse than even their clergy imagine. So you can appreciate the question that bothered me this Sunday:

How will we as a church progress together after the Trump presidency?

I don’t think we need a new program or the next expert to answer this question. Rather, the answer lies in the fundamental elements of church life: worship, care, and mission around the gospel of Jesus Christ.

However, the breaks in old friendships along political lines force us to ask some difficult questions. To begin with, do we really believe what we say we believe? Does our Christian faith really exceed our political opinions? To achieve this, it takes a tenacious, sometimes relentless commitment to “maintain the unity of spirit in the bond of peace” (Ephesians 4: 3).

How does that look in real time?

It has to start with our worship. If, when we gather together on Sunday morning, the first category that comes to mind is whether they are for or against Donald Trump, then Christian unity is dead in the water. Jesus’ exemplary prayer challenges our priorities and shifts our attention from our earthly leaders to our Heavenly Father. The call of God’s holy name must transcend political agendas, and prayer for the coming Kingdom must replace the yearning for American greatness. In our church we try to make these implications clear in our worship. When we breathe the air of heaven, it should stifle complacency or resentment about political differences.

This transcendent starting point is indispensable for our life of cultivating relationships with one another. This doesn’t mean avoiding divisive topics or awkward conversations. The fixation of our identity in the spiritual reality should create a stable unity in our dialogue with one another on difficult issues. In recent years, at various times, our church has devoted our Wednesday evening Bible study time to moderated discussions on sexual abuse and healing, racial relations, and politics. These can be tense. Sometimes they spark private conversations when members of the Church, in hushed tones, share their thoughts on a controversial matter with me, unsure whether they can express that opinion publicly. Regardless of the type of communication, the goal is to create a church culture in which we can talk about difficult things.

When it comes to politics, my priority is not conformance at the granular level of politics and politics. The relationships I am expected to maintain as a pastor are rooted in our mutual trust in Jesus Christ. In this family we are called to empathy: “Rejoice with those who rejoice, weep with those who weep” (Romans 12:15). The day Joe Biden’s victory became apparent, I phoned pastoral workers acknowledging the grief of a staunch Trump supporter and the excitement of a Biden fan. There can be no rounds of victory, no joy in the family of God when our goal is connection in Christ.

I’ve seen these connections melt away the assumptions. I saw it at lunch when an older white man and two black men were telling their stories. Bonds were forged because experiences with exclusion and stereotyping came from very different backgrounds. I saw it at a dinner hosted by one of our deacons. Around this festival, which was not tied to boundaries of 280 characters, the nuance was revived when an immigrant couple expressed both disgust at Trump’s tone towards immigrants and an appreciation of the evils in their community, which had accurately described some of his rhetoric . I don’t think anyone’s voice changed as a result of these interactions, but we got away with deepened, neat relationships and seen and felt known across racial, cultural, and political boundaries.

The most important connecting element in our church was our common mission. We’ve served our community in a number of ways, but when the pandemic broke out, our weekly food ministry saw a significant spike. By summer 2020 we had served five times as many neighbors as in the previous year.

When our food ministry chief began sharing reports while we were on-line, donations of food and money came in. Neighbors who saw the long lines brought groceries. More than one family has spent their stimulus check to replenish our shelves. Volunteers came to fetch food, deliver boxes of COVID recommendations from the county, hand out Bibles, entertain the children in line, and offer prayer and salvation that comes from trusting in Christ.

The energy surrounding this ministry has been one of the most enjoyable things in our church over the past year, and goes completely beyond voting habits, political views on poverty, and our volunteers’ opinions beyond Trump. We were too busy serving the real need, arguing about what might be.

None of this minimizes the difficulty of building harmonious relationships in a politically diverse church. We often have moments like this when someone wonders if they are behind eyes or spoken out loud, “How can you follow Jesus and support this politician?” Or “How can you read the same Bible that I am reading and support these policies ? ” Building a community in the midst of disagreement requires tremendous trust – trust that God is greater than my understanding of how belief and politics fit together; trust that the other person really loves God and me even though our views clash; Trust that Jesus is tall enough to hold us together. 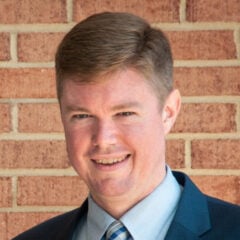 The only way forward is the way up. If we complain about a stolen election or give out an “I told you”, we will run aground, downsizing the gospel, and exposing the smallness of our faith. Only if we walk in our common identity and mission while keeping our political preferences, theories and assumptions relaxed can we move forward together after the Trump presidency.

(Chris Davis is the father of a transracial family and a pastor of Groveton Baptist Church, a multiethnic, international church in Alexandria, Virginia. Davis writes on therodandstaff.com. Find him on Twitter @ simpleman52. The views expressed in this comment need not necessarily reflect those of the Religion News Service.)

My #LawTwitter disclaimers | Above the legislation